Back to hydro - and doctor problems 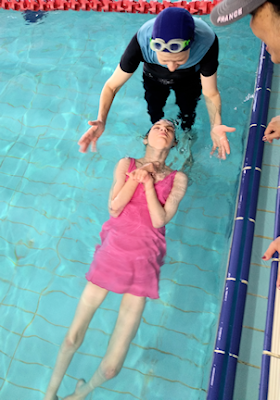 C. finally scored one hydro session during the month of her therapy pool's closure. I had hesitated to give her one because the water in the available pool - it's the one I swim in - is much colder than C.'s therapy pool. But our past experiences there, about a year ago, usually proved worthwhile nonetheless.

So with E. and the Hubby we gave it a shot on Sunday.

The first ten minutes she was tense, limbs bent and unable to float on her own. I was tempted to admit defeat. But eventually she floated independently, kicking slightly - admittedly shivering - but thrilling us all nonetheless for around twenty minutes.

On the seizure front, we're still seeing somewhat of an improvement with the raised Vimpat dose though not the sort that halts the hunt for better control.

But for now we're occupied with trying to get a neurologist to submit the paperwork required by our health fund for renewal of our Vimpat authorization. It expires on November 24th and the paperwork involves a neurologist filling in forms along with numerous other signatures, a time consuming process.

The problem is we're getting the email silent treatment from the two neurologists who have most recently treated C. One is the doctor who recommended adding on Frisium while also recommending that we see an epileptologist since epilepsy isn't her area of expertise (she's a headache specialist!) We notified her that we'd heeded her advice re an epileptologist but not the Frisium tip. We were pleading with her to contact a senior neurologist who had helped us immeasurably in the hospital last year.

No response from her. Apparently she had her heart set on C. getting Frisium - which would have brought her ant-epileptic tally three! (Excluding cannabis.)

The second neurologist ignoring us is the epileptologist we first saw last month - and paid out-of-pocket for the privilege. She is the one who urged us to raise the Vimpat dosage. And now she won't help is out with the Vimpat authorization paperwork!

Is there something in the water these neurologists drink that makes them so heartless?
Written by The Sound of the Silent

C. is the youngest of our children. She suffers from severe epilepsy, blindness, microcephaly and profound cognitive and physical impairment.

We have faced hurdles and gained insights through our encounters with the medical, educational and governmental establishments.

Nobody was there to help or guide us.

I would love to spare parents in the same predicament some of the painful mistakes and wasted efforts we have made.

I am also eager to promote greater acceptance, inclusion and appreciation of our children. The new, heightened awareness of people with disabilities tends to gloss over our children - the ones with profound disabilities. They are a forgotten minority within this minority. Still marginalized and even shunned by many "enlightened" societies, they are a long way off from achieving equal rights.

Silenced by their disabilities, this blog is their voice.

Search my blog by labels

Most popular posts of past 7 days

Archive of all my previous posts